¤♥¤
Years later, my mother was 19 years old, she pieced together her first quilt, a traditional eight-point star motif, while living in Québec while participating in Katimavik:

“One of the goals in the program were to learn about culture and the French language. This is how my quilt project started. I was billeted for one week with a Franco-Ontarian family in a village called Ste Isidore just outside of Ottawa. The mother, Rejeanne was part of a local Craft Co-op and I was to help her out for a week by tending the little shop in town. It was the middle of February and the shop was quite quiet. I was a little disappointed by this but a little relieved as well as I was terrified by the idea that I was to try to make an effort at communicating in french and I was just learning the language. I was encouraged to take on a craft project by Rejeanne. In the shop I noticed a package of fabric with scraps of material and it reminded of the quilting that my mother did at home. I was a little homesick at the time and thought this might give me a connection to where I came from. Rejeanne was only too happy to help me as she loved to sew and was a quilter herself. She told me I could use her sewing machine but that we would have to work quickly as time was limited. We could get the patches cut and sewn together but we would not be able to do the quilting. I thought this was ok as I knew my mother could borrow a quilting frame and that the project could be finished later. We managed to get most of the patches ready but some had to be completed later. I had done a little sewing before this but it was really the first time I had done a big project. It was a good way to spend the week and made me feel like I belonged a little more in a family where I was struggling communicating – especially with Rejeanne who I think respected my efforts at quilting.”

In the end, my grandmother and the ladies from the community stretched that quilt over the wooden frame and finished the quilt for my mother, who lost interest after she got back to her home-place, in the prairies of Saskatchewan.
¤♥¤
I don’t have memories of my grandmother or my mother quilting as I grew up, but I remember the quilts. I remember the two quaintly-mismatched polyester-square patchwork quilts that adorned the beds in the back room of my grandmother’s house. I remember snuggling into them as the sounds of trains would keep me awake at night. I remember wondering what the gaudy motifs of the patches would have looked like as clothing in my grandmother’s closet. It was hard to imagine sunshine-yellow-checks and white-pocadots-on-seafoam ever being in fashion.

I remember the patchwork quilt that covered my bed as I was growing up. It was a map of make-believe far away lands. It was comforting shelter during thunderstorms, and an extra protective armour during cold prairie nights around bonfires. And when I moved out, for the first time on my own, it made my first home as an adult, well, home.

It was pieces of my grandmother’s clothes, stitched together by hand, blessings of bloodlines manifest. But over the years it became scarred by sparks from the fire, and torn from hundreds of tumbles through the washer and drier. And I was absolutely devastated to admit it might be time to retire the quilt forever. I brought the weathered and worn pieces to my mother’s home. And a couple of weeks later, she gifted me four 1″x4″s, four c-clamps, and a package of pushpins: the makings of my first quilting frame.

That winter my mom and I re-backed my grandmother’s patchwork quilt. And so began a unforseen journey of many, many quilts…
¤♥¤ 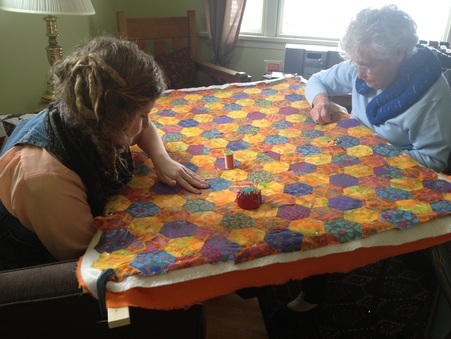 That summer my grandmother, mother, and I were strolling through a little mountain town, killing time before a cousin’s wedding. We wandered past a quilting shop, and my grandmother said something about making a baby quilt for my about-to-get-married cousin, who was also expecting.

We took our time picking out the honeycomb pattern and fabric, figuring we had plenty of time to work on the project… and then my grandmother had a severe and unfortunate reaction to some antibiotics and lost her mind, along with most of her memories and her ability to knit and hand-sew.

My grandmother is the matriarch of a family tree full of masculine energy. My grandfather passed away in 1964, leaving my grandmother an expecting single-mother of six boys and one daughter, with her eighth child, another boy, on the way. The fact that she hadn’t been to the hospital since the birth of her last child until she was 85 and caught phenomena, I think left us all with the impression that she was basically infallible. My grandmother was legend, she transcended age and illness. When she lost her mind, I lost my footing too.

My mother and I didn’t know what to do. Should we still put together this quilt without my grandmother to show us the way? We had all the materials after all. It seemed like a waste not to follow through, but the idea of quilting without my grandmother, without the third generation, was truly heart-breaking. But some times heart break cannot be helped.

I had no idea what I was doing. I had never cut anything as precisely as it seemed like quilt squares should be cut. I had worked in a fabric store years before and knew of all the specific tools and notions one was “supposed to use” whilst quilting, but I was not familiar with how to use any of them. I knew how to sew, but had no idea where to even begin sewing together hexagons in any way that wasn’t absolute chaos. But I took heart in the fact that my grandmother was never one for following the rules, and so I gave myself permission to lean into the chaos and let it take over my living room for several weeks.

When the patchwork was finally pieced together, we brought the half-finished quilt to my grandmother. She mumbled something about not remembering how to stitch, and we told her that was fine, all we asked was for her to hold the quilt and put her blessings into it, at the very least.

My mother and I went to the kitchen to finish preparing dinner, and when we returned to the living room to call my grandmother to the dinner table, we found her on the couch, needle in hand, stitching away.

Over the coming months, my grandmother, mother and I would sit around the quilting frame. Her stitches were uncertain, awkward, uneven. But as time passed, they found their rhythm. My grandmother’s fingers recalled the motion, and her tongue recalled stories neither my mother or I had ever heard before. The honeycomb stitches brought stories and healing to our family, and they surrounded me with my strong feminine bloodlines.

After the third quilt, I moved across the country and learned to call Montréal home. And so the tri-generational quilts became a cross-country project. I was no longer able to sit around the quilting frame with my grandmother and mother as often, but was instead blessed with the opportunity to cut and piece together honeycomb patterns with another one of my cousins here. It has since become tradition to send these quilts back and forth across the country, so that many hands can stitch their stories and love into the fabric. And so they have become  blessings of my grandmother, mother, and myself, as well as our cousins, aunties, uncles, and partners, and a sign of our family ties that bond across time and distance.

By the end of 2019, as Aggie enters her 96th year, we have begun assembling the 22nd Forbes Family baby quilt. This union of female tradition, bloodlines, and space has inspired me to continue exploring quilts as medium for healing and the bringing together of community in a profoundly deep and slow way that I believe we need now more than ever.
¤♥¤
If you ask quilters, they will tell you that patchwork can teach you many of life’s secrets. It will teach you patience and the perseverance to overcome frustration. It will teach you to never overlook the potential for renewal; how many different patterns can be made with a single geometric shape; how many stories can be told with tattered rags, a needle, thread, and thimble. It will teach you how the healing and return to togetherness and community our societies are desperately craving is not all that different from the transformation and rebirth craved by single patches as they are carefully pieced together into patchwork.

Not that unlike the homecoming of an old woman’s scattered memories as her hands relearned the ups and downs of stitchwork as she sat around a quilting frame with her only daughter, and her daughter’s only daughter.